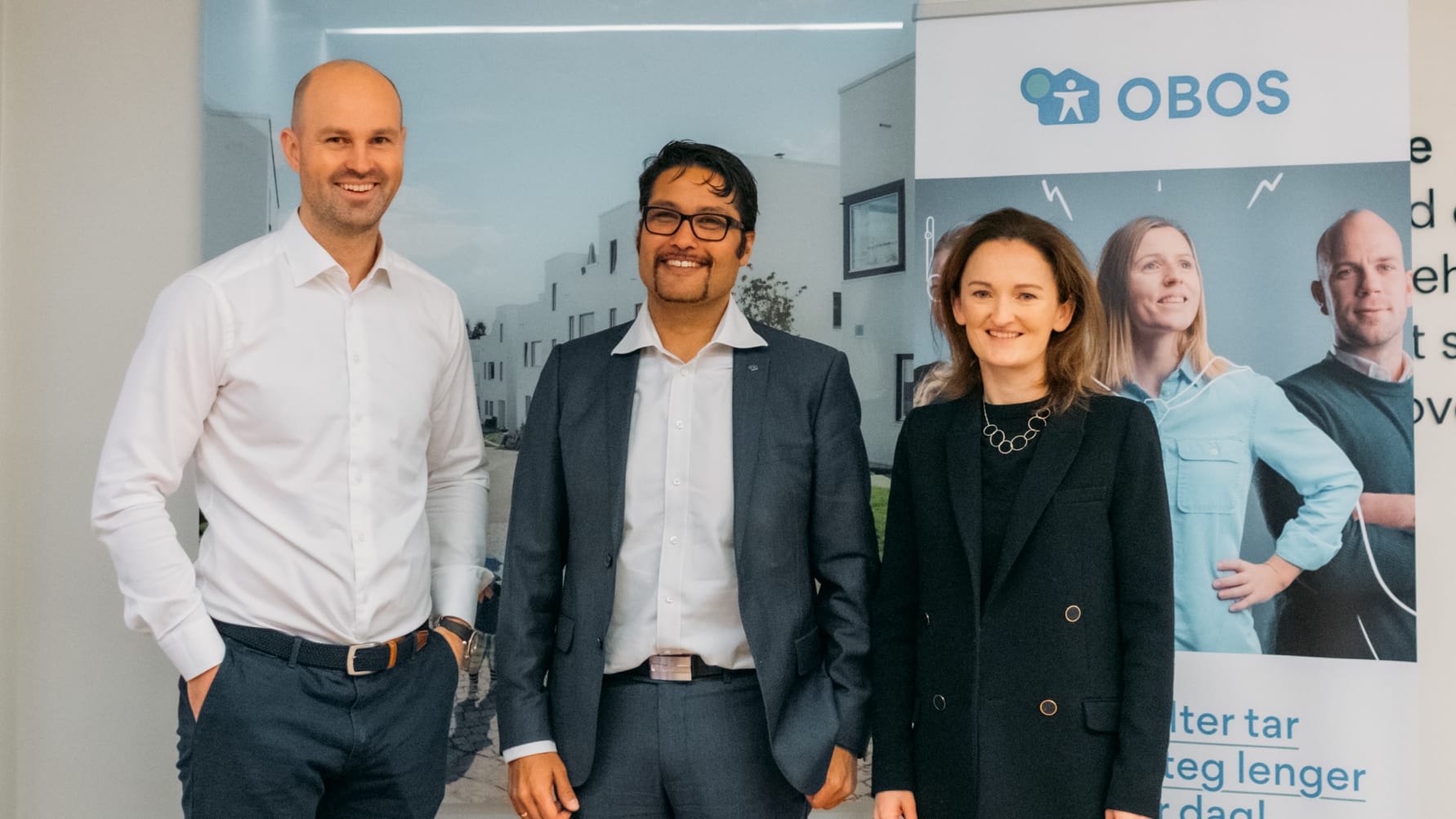 Oslo, Norway, 20 November 2019: Today, OBOS and AI-startup Spacemaker announced a long-term enterprise agreement (with a value of more than Euros 2 million / NOK 20 million). OBOS is one of the leading real estate developers in the Nordic’s with over 5500 residential units under production in Norway and Sweden and 700.000 m2 of commercial property. With the AI technology delivered by Spacemaker, OBOS aims at keeping and adding to their leading position as digital transformation champion in the Nordics and beyond.

- In OBOS we are constantly looking for better ways to design communities and cities that are both sustainable and livable. Technology providers, such as Spacemaker, have an important role to play in creating spaces that can stand the test of time in the face of climate change, population growth, and rapid urbanization. Now we are looking forward to implementing AI in all new OBOS projects going forward, says Daniel Kjørberg Siraj, CEO OBOS.

Making it a standard for all major early-stage development projects, OBOS will start rolling out Spacemaker’s AI-driven platform with immediate effect across its operations in Norway and Sweden.

OBOS was an early supporter and contributed significantly to the testing phase of Spacemaker’s product development. Winning the real-estate heavyweight as a long-term customer now is a significant milestone for the young company.

- New technological solutions and AI have not yet been fully introduced to the construction industry. The AI technology developed by Spacemaker has the potential of changing the way that we make decisions and collaborate in the early phases of all our new real estate developments. This will ensure better and more profitable projects in addition to saving time in the planning process says Daniel Kjørberg Siraj.

Spacemaker has been growing rapidly since its launch in 2016. With now more than 100 employees and three additional offices outside of Norway, their main objective is to empower developers and architects to build more sustainable cities with the help of artificial intelligence.

- The way we plan and design our own habitats remains archaic and is not fit to address the challenges that we are facing as a society with the urgency they require. OBOS is well-known for its role in pushing the construction industry into the 21st century and we are proud that Spacemaker has been chosen as a strategic partner on their journey, says Anders Kvale, Chairman of the Board and Co-Founder of Spacemaker.

OBOS was established by creative entrepreneurs in 1929, who saw the need for a new way of solving the housing crisis for the working class in Norway. They found a new business model to conduct residential development, property management and financial operations – the co-operative building society model. OBOS is now owned by more than 465.000 members and has 2600 employees.

OBOS has since then evolved into a leading residential and commercial developer in both Norway and Sweden. It has developed and built more than 100.000 homes and presently has over 5500 homes under construction with a land bank of over 35.000 units. As an urban developer, OBOS also owns and develops more than 700.000 m2 of commercial property. OBOS manages 230.000 homes and has its own bank with a gross loan portfolio of over 42 billion NOK. In addition, OBOS is a strategic investor in the construction industry, being the main investor in listed companies Veidekke ASA, AF Gruppen ASA (both Oslo) and JM AB (both Stockholm) with a total value of 8,7 billion NOK.

OBOS' vision is to build the society of tomorrow and fulfill housing dreams. In this context, the company allocates significant resources to innovation and furthering the development of existing businesses. It also invests in startups with Spacemaker AI, Otovo and Catenda as key investments.

We’re delighted to announce our partnership with BPD, the largest real estate developer in the Netherlands and Germany.

Our hackathon hall of fame

Countless weird and wonderful ideas have been realised as a result of our hackathons. Here are some of our favorites.

Industry & Insight
Privacy settings
Do not sell my personal information
Privacy / CookiesPlatform Analytics ListTerms of Use
Copyright 2020 Spacemaker. All rights reserved.
Stay in the loop
The Spacemaker newsletter is a resource for AI technology, research, advice, and learnings. Subscribe to our newsletter for the latest news!
SolutionsAboutCareersContactBlogWebinars
Customers
Contact
Blog
Start trial
Log in